The botanical name derives from on the one hand the superficial similarity of its foliage to that of the cycad genus Zamia and on the other hand its kinship to the genus Colocasia under that genus’ synonym of ‘Culcas’. Botanical synonyms include Caladium zamiaefolium, Zamioculcas loddigesii and Z. lanceolata. It is sometimes known by the trivial names ZZ plant, Zuzu plant, aroid palmand eternity plant.

It is a herbaceous plant growing to 45–60 centimetres (17.7–23.6 in) tall, from a stout underground, succulent rhizome. It is normally evergreen, but becomes deciduous during drought, surviving drought due to the large potato-like rhizome that stores water until rainfall resumes. The leaves are pinnate, 40–60 centimetres (15.7–23.6 in) long, with 6–8 pairs of leaflets 7–15 centimetres (2.8–5.9 in) long; they are smooth, shiny, and dark green. The flowers are produced in a small bright yellow to brown or bronze spadix 5–7 centimetres (2.0–2.8 in) long, partly hidden among the leaf bases; flowering is from mid summer to early autumn.

Zamioculcas zamiifolia contains an unusually high water contents of leaves (91%) and petioles (95%) and has an individual leaf longevity is at least six months which may be the reason it can survive extremely well under interior low light levels for four months without water.

The plant has air purifying qualities for the indoor environment. A Study from Department of Plant and Environmental Science at the University of Copenhagen from 2014 shows the plant is able to remove volatile organic compounds in this order of effectiveness, benzene, toluene, ethylbenzene and xylene at a molar flux of around 0.01 mol/(m2day).

Zamioculcas zamiifolia is part of the Araceae family which is well known for many poisonous genera, such as Philodendron, which contains calcium oxalate. Needle-like calcium oxalate crystals could irritate different sensitive skin parts, mucosa, or conjunctiva.

Speculations and hysteria during the 2010s led to a belief that Z. zamiifolia could be extremely poisonous. Extreme versions of this rumor claimed that the plant could cause cancer and was even dangerous to touch, leading people to wear gloves when handling it.

Given the facts that the plant has been used externally in traditional medicine, is a very common office plant and is cultivated on a large scale, it is safe to assume that Z. zamiifolia is not very toxic.

In fact, an initial toxicological experiment conducted by the University of Bergen in 2015 on extracts from Z. zamiifolia using brine shrimp as a lethality assay did not indicate lethality to the shrimps even at concentrations of extracts up to 1 mg/mL, providing disproving evidence for the assumption of Z. zamiifolia‘s toxic character. The scientists conducting the experiment found that “On the contrary, it could appear as though the extract contributed to improvements in the vitality of the larvae”.

Zamioculcas is grown as an ornamental plant, mainly for its attractive glossy foliage. It can be kept outdoors as long as the temperature does not fall below around 15 °C (59 °F); best growth is between 18 °C to 26 °C (65° to 79 °F). Hot temperatures give an increase of leaf production. In temperate regions, it is grown as a houseplant. Over-watering may destroy this plant; erring on the side of dryness is preferable to risking tuber rot. Do not use leaf shiners. A quarter or eighth strength liquid fertilizer such as fish emulsion or worm-cast liquid may be used once a month at the warmest period for potted specimens. Bright, indirect light is best for Zamioculcas, although it will tolerate light levels as low as 270lx (25 fc), which is equivalent to the light 70 cm (27.5 inches) away from a 100W incandescent light bulb. Some sun will be tolerated, very early in the morning for hot districts – morning or afternoon for cooler districts.

Zamioculcas zamiifolia may be propagated by leaf cuttings: typically, the lower ends of detached leaves are inserted into a moist gritty compost and the pot enclosed in a polythene bag. Though the leaves may well decay, succulent bulb-like structures should form in the compost and these may be potted up to produce new plants. The process may take upwards of one year. 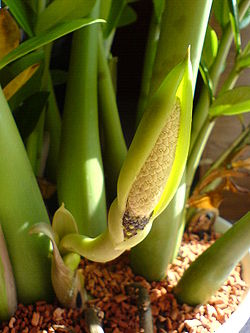 Though little information is available, Z. zamiifolia is apparently used medicinally in the Mulanje District of Malawi and in the East Usambara mountains of Tanzania where juice from the leaves is used to treat earache.

In Tanzania a poultice of bruised plant material from Z. zamiifolia is used as a treatment of the inflammatory condition known as “mshipa”.

Roots from Z. zamiifolia are used as a local application to treat ulceration by the Sukuma people in north-western Tanzania.

Our managers will contact you in the near future!